In 2015 Qausuittuq (pronounced cow-soo-ee-took, meaning “a place where the sun doesn’t rise”) became Canada’s newest national park. At 11,000 square kilometers, the park makes up almost two thirds of Bathurst Island in the Canadian high Arctic. The park is one of the most challenging to get to, with the nearest access point being the community of Resolute Bay on Cornwallis Island, just to the east of Bathurst. In July 2016, three of us took on that challenge.

Paul and Sue Gierszewski who are trying to visit all the major parks in Canada, and I, a “Park Bagger” trying to visit all the National Parks of Canada, made it our priority to become the first ever to visit Qausuittuq. Together with Dave Weir of Ice Blink Expeditions, we persevered against the odds of getting to the park: our attempts to fly via Iqaluit and Resolute Bay kept being foiled by dense fogs and high winds. Although these standard Arctic travel delays seriously compromised our window of opportunity, our patience paid off: On the eighth day of our journey we finally boarded the Twin Otter that would fly us into the north end of the Park.

Immediately upon landing in Qausuittuq, we discovered the reason for the park: the preservation of endangered Peary caribou. They were everywhere. We saw several small groups of two to eight animals: cows with calves, and bulls. Their velvety antlers glowed in the bright sunshine; their flanks flashed white as they scampered across the plains. They were foraging on the few bits of greenery growing amongst a seemingly never-ending field of rocks.

A couple of male caribou stopped and stared at us, and evidently deciding that we weren’t a threat, continued on their way right across our route. They were grazing as they journeyed just a few meters before us. On our part, we too stopped and stared, back at the caribou. We silently watched in awe, respecting their space.

Such beautiful animals. Only approximately 91 centimeters tall at their shoulders, Peary caribou are small compared to their southern cousins, the woodland and tundra caribou. Their petite statures belie their extreme hardiness, being able to comfortably cope in the harsh Arctic environment. Temperatures in the few weeks of summer go up to only around 5⁰ Celsius on Bathurst Island, and there is so little precipitation that the island is considered to be part of a polar desert. The land that we saw consisted mostly of small rocks and dried mud flats with only sparse patches of lichens and mosses. We did not even encounter the usual Arctic plants such as moss campion, broad-leaved willow herb, and arctic willows. There is not much for vegetarians like the caribou to live on. 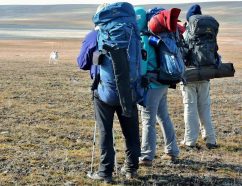 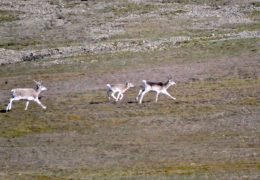 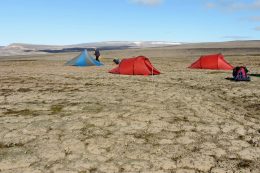 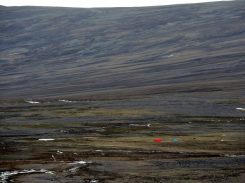 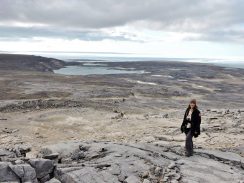 Mountains of the Stokes Range

We heaved on our heavy backpacks and hiked out of the gravelly plain on which we had landed. We slogged through the shallow, snow-melt soggy muck on the edges of the valley, and onto higher, drier ground. We set up camp near a clear-running stream, in a pretty field of yellow Arctic poppies. To be precise, the poppies grew through the cracks of a dried mud plain, each plant blooming a few feet away from its neighbour. However, in a place so devoid of life, a plateau dotted with bobbing colour was a major attraction.

The low rounded mountains of the Stokes Range rose up around our camp. From a distance they looked like gentle, easy to climb hills. As we climbed up one 350 meter rise, we discovered that the hills were strewn with huge flat boulders interspersed with jumbles of sharp-edged rocks that threatened us with cuts and sprains. There were patches of shale shards which slid out from under our feet, and sand blowouts in which we found chunks of clear quartz. A few patches of snow still clung stubbornly to the shady side of rocky alcoves – we wondered whether these remnants of last winter would melt before the end of this summer.

From the top of the mountain we looked out over park. The other valleys between the Stokes Mountains looked just as broad and barren as the one we were camped in. In the distance, the Arctic Ocean was filled with broken ice, reminding us to be vigilant of possible wandering, hungry polar bears. Human beings are not at the top of the food chain in the Arctic. With no infrastructure, emergency shelters, or trails on the island, we were extremely aware of how vulnerable we were. Qausuittuq is very, very remote.

Despite the apparent desolation, our little group of explorers discovered that in Qausuittuq National Park of Canada, the sun doesn’t rise in the summer because it never sets; and the sun shines brightly on the now protected home of the Peary caribou.